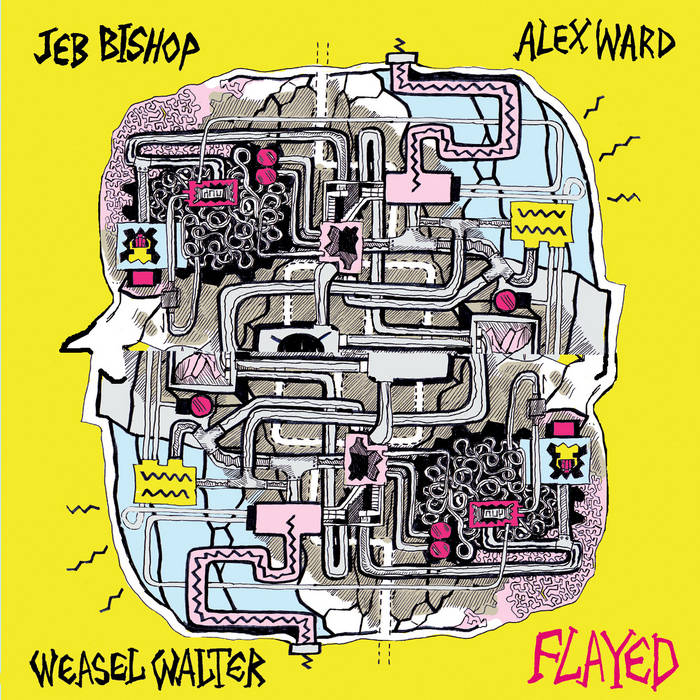 "Flayed" is a studio recording of the first time meeting of this particular combination, although I share a good amount of history and friendship with both musicians. The singular contrabassist and our mutual peer Damon Smith had the bright idea to make a quartet record with Alex Ward, Jeb Bishop and myself, since both of those guys were going to be around New York on the same dates. Jeb and Damon had been working together frequently in the Boston area and Alex was in town at the time touring with This Is Not This Heat. Damon ultimately had a schedule conflict and began recommending substitutes, but I posited that a trio sans bass would reveal a fresh, less idiomatic dynamic. Jeb Bishop spent some time as bass guitarist and trombonist in my ever-evolving unit The Flying Luttenbachers during 1993 and 1994. We worked together in numerous improvised music settings during that decade and we touched base periodically through the years while he roamed the planet with the Peter Brotzmann Chicago Tentet and interfaced with an endless array of esteemed international improvisers. Alex Ward cut his teeth as a precocious kid clarinetist performing adroitly with Derek Bailey. He worked prolifically in the improvised music scene and eventually revealed a penchant for articulate, noisy guitar playing. We finally got a chance to play and hang during a British jaunt I undertook back in 2011, which also resulted in the formation of our long running trio Deadly Orgone Radiation with guitarist James Sedwards. Most recently, Alex toured Europe in the guitar position with the latest Flying Luttenbachers lineup. The three of us are all longtime music fanatics/researchers/trivialists, and the intersection of our mutual obsessions and sensibilities in the areas of experimental rock and hardcore free jazz/improvisation bear most heavily on these eight tracks of diverse, spontaneous improvisation. I believe we achieved a good amount of sonic, timbral and structural diversity while retaining the tension and energy we all continually aspire to. Alex switched strategically between his axes and Jeb brought along a small, chaotic cracked electronics setup to contrast his virtuosic trombone displays. In these settings I try to approach my drum setup from a quasi orchestral perspective, focusing specifically on different combinations of components or using auxiliary percussion and preparations to extend the possibilities of my sound palette. "Flayed" is a spicy hot cut of high velocity free improvisation. Don't worry, dear listener - if you get close to it, I promise it won't cut you like a saber, but it might clean your ears out like a wire brush.