End Of An Error 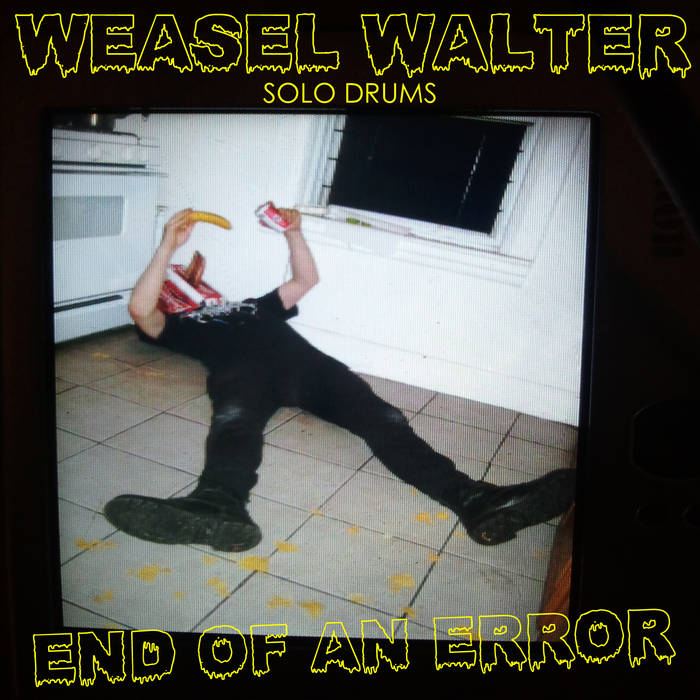 Steven Smith weasel is a very good drummer! check it out!

"Robert Wyatt, the composer, songwriter and onetime Soft Machine drummer, recently announced his retirement from music at age 69. As his role in the Softs was coming apart in 1970, he released his first solo LP, titled End of an Ear, which announced an entirely different sonic imprint than heard on most period Canterbury records (and was made in opposition to his former bandmates).

One can hope that drummer/guitarist Weasel Walter will keep pushing back at least that long; End of an Error marks his geographic departure from New York and the city’s improvisational underground. However, for the past year and change, he’s been on the road with Lydia Lunch and Cellular Chaos and thus setting the kit aside, as noted in the accompanying essay, so perhaps what better way to announce the next phase than returning to his roots? Walter’s first release was a cassette of multi-tracked solo music, The Final Solution (1991), and as much as he claims an aversion to solo drumset recordings, End of an Error makes a case for his ability to compel with a narrow palette.

Contra crowd pleasers like Han Bennink, Pierre Favre or Paul Lytton, Walter uses a pared-down and high-tuned kit, augmented only by scattered gongs, roto-toms, ratchet, and jam block. There is a noticeable and serious arc to this 26-minute live performance, building on sharp, isolated micro-phrases and accenting bombs, condensed and needling movements accentuated by garish, sashaying gestures. At the five-minute point, small sounds are overlaid and the focus turns to a larger field of action, though not without customary, haranguing clusters. Of course, even as a solo operating within several parallel areas, there are common phrases and a concentrated heft, allowing this admittedly lengthy piece to hang together as a totality (even in seeming asides, like the fiddling section at 18:25). Piling dry, discrete notes and spreading them out in a study of directed contrasts, Walter’s approach is reminiscent of European and Japanese free players, though with a manic clarity drawn from no wave and metal. But rather than a summation of what’s come before, End of an Error is a statement of purpose, and a reminder that committed, absolutist art is the only step forward that’s worth taking."